Press Release – But Who Shall Return Us Our Children? A Kipling Passion 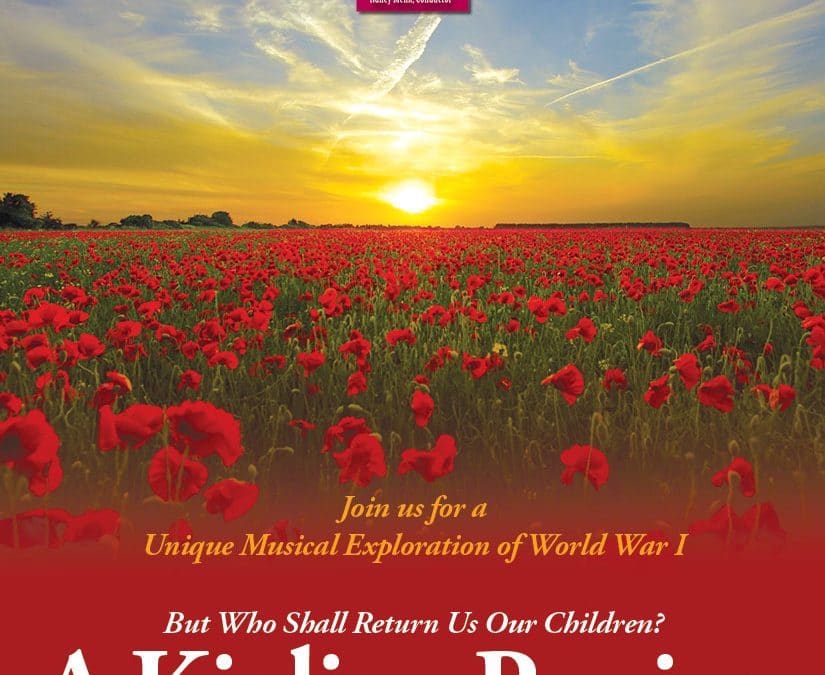 South Bend, Indiana — This memorial statement introduces the score for a new oratorio, But Who Shall Return Us Our Children? A Kipling Passion, that will be sung by the South Bend Chamber Singers at 7:30 p.m. on Sunday, May 20, at Saint Mary’s College. The quote is found in Sussex, England, on a church plaque commissioned by John Kipling’s mother and father, the latter, the famed author Rudyard Kipling. Early on, the senior Kipling actively joined many others in Britain to support World War I. His son’s death, however, rocked his old-world view.

Chamber Singers director Dr. Nancy Menk explains that the piece is a commemoration of the centenary of World War One (1914 – 1918) and includes much original music as well as music and texts selected and adapted from traditional music of the World War I era, hymns, and Bach chorales. The composer, John Muehleisen, researched and compiled the libretto based on historical sources, Kipling’s own work, and the powerful poetry of Wilfred Owen, Siegfried Sassoon, and other noted authors.

This ambitious blending of resources tells of the Kipling family experience within the larger framework of a part of the world that suffered one of the deadliest conflicts of humanity — one story of from 16-18 million — the estimated range of the number of civilians and soldiers who died during the war.

The soloists sing the parts of Rudyard Kipling, his wife Carrie, and their son John who goes to war, is reported missing, and ultimately, two years later is finally officially declared dead. Guest soloists for the evening are Kimberly Giordano, soprano, Matt Kelly, tenor, and Corey Crider, baritone.

Muehleisen dedicated But Who Shall Return Us Our Children? “To the Fallen and the Survivors of World War I and of all wars before and since; To the Families and Friends and Loved Ones of those who fell and of those who survived; and to Veterans of all Wars, Foreign and Domestic for their Service and Sacrifice.”

This 7:30 p.m. South Bend performance at O’Laughlin Auditorium is the Great Lakes region premiere of his work.

Audience members also will be able to view materials in the O’Laughlin lobby that have been provided by the South Bend History Museum that describe many aspects of the war, and a Miller’s Vets Color Guard will process in as an introduction to the concert. Miller’s Vets is a housing, education and jobs organization for area homeless vets.

Muehleisen was the 1988 recipient of the Louisville Orchestra Composition Competition Award and has received numerous commissions, awards and grants from the Jerome Foundation, Meet the Composer, ASCAP, the American Music Center and the National Endowment for the Arts.

For more information about this concert, go to SouthBendChamberSingers.org. Tickets are available on advance at the Saint Mary’s College Box Office in O’Laughlin Auditorium from 9 a.m. to 5 p.m. or at the door the night of the performance. Credit card orders may be made by phone at (574) 284-4626.

The South Bend Chamber Singers, an ensemble-in-residence at Saint Mary’s College, is in its 29th season. For more information about Christmas at Loretto or other concerts in the 2017-2018 season, visit: www.southbendchambersingers.org.

In this video, excerpted from the 2019 Christmas at Loretto concert, given by the South Bend Chamber Singers under the direction of Dr. Nancy Menk, we hear t...

Thank you to The Choir Project for sharing our latest commissioned work from Dominick DiOrio! ... See MoreSee Less

Thank you to The Choir Project for sharing our holiday offering from last year! ... See MoreSee Less