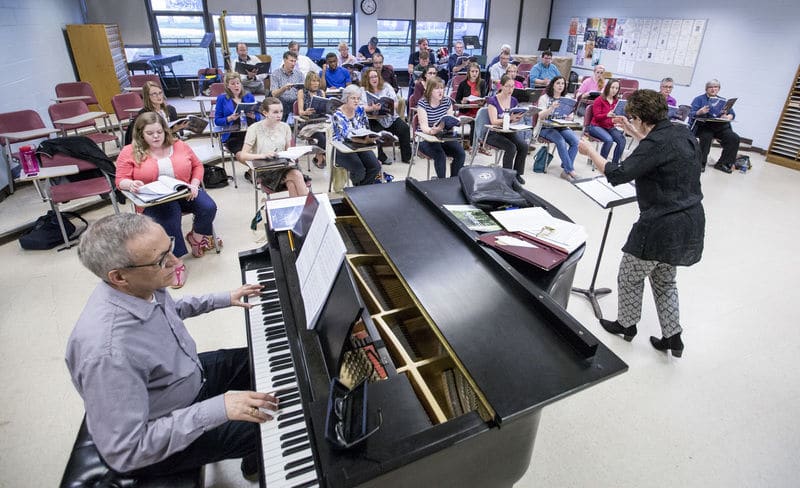 But this year will be different.

Along with Temple Beth-El, the Jewish Federation is sponsoring the South Bend Chamber Singers’ concert Sunday at the temple, where the main piece is British composer James Whitbourn’s “Annelies,” a choral setting of Anne Frank’s “The Diary of a Young Girl.”

“The first time we read through it, by the end, people could hardly sing they were so choked up,” conductor and Chamber Singers founder Nancy Menk says. “That was in September, and here it is April and we’re going to do it, and (on April 9), we had a rehearsal, and at the end, I could hear people sniffling. It’s still hard to get through. It’s very powerful.”

The chair of the music department at Saint Mary’s College, Menk says Whitbourn employs a variety of musical styles, all of them illustrative of what’s happening in the text, and makes the piece much like an opera by structuring it as a story.

“There are places where you hear hymn-like passages, full choral sounds, places where we’re almost whispering because we have to because we’re in hiding, places that sound like chants in minor modes that are foreboding about what’s to come,” she says. “There are happy passages because she’s a young girl. Popular music of the day is worked into it.”

A member of the voice faculty at Saint Mary’s and the University of Notre Dame, soprano Elizabeth Schleicher joins the Chamber Singers as the guest soloist in the role of Anne.

“I do find her lines are very lyrical, very melodic,” she says. “It’s all very beautiful. It’s not meant to be harsh, even though he has some dissonant harmonies. I think you have some harmonies that you associate with traditional Jewish music, and I really hear that throughout the piece.”

Whitbourn’s cantata is the first major choral adaptation of the diary. Adapted by British poet, author and librettist Melanie Challenger, the text for “Annelies” includes entries from Anne’s diary with titles such as “The plan to go into hiding,” “Fear of capture and the second break-in” and “The hope of liberation and a spring awakening.”

Like many people, Schleicher read “The Diary of a Young Girl” when she was a teenager, at about the same age that Anne wrote it.

“I think I’m constantly reminded that she is a child, even though she is in this transitional point of her life,” she says about revisiting the text as an adult. “She’s very positive, and she’s very honest in what she writes about, what’s going on around her, the relationships of her family and the people they’re housed with.”

“Often, I have the text from the earlier time, when it’s talking about what the hiding is like and her day-to-day experiences,” Schleicher says. “Then the chorus often comes in with the text from later, 1943 or ’44, closer to the end of the war, and it’s a lot more dramatic in its descriptions of what they see and hear.’ … I think he uses the soprano voice to represent that youth and hopefulness.”

“They’re really beautiful and bring it to a close,” Menk says. “We thought it needed an ending. The final text of the final piece is ‘Seek the Lord and his strength; seek His presence continually.’ … It’s very soothing and calming.”

Because the concert also serves as the local observance of Holocaust Remembrance Day, it begins with a candle-lighting ceremony and prayers.

“As a Jew, I feel as part of the Jewish community, we should always remember the HaShoah and keep those people with us and honor their suffering,” Jewish Federation program associate Monika Wayne says. “For the public, I really think the Holocaust, if you study it a little bit, it’s a really good tool to teach about tolerance.”

Fully vaccinated people can now sing in an indoor chorus! See you in the fall!! ... See MoreSee Less

A performance of "Gloria" from "The World Beloved: A Bluegrass Mass" (Barnett) by the South Bend Chamber Singers with Monroe Crossing (Nancy Menk, conductor)...