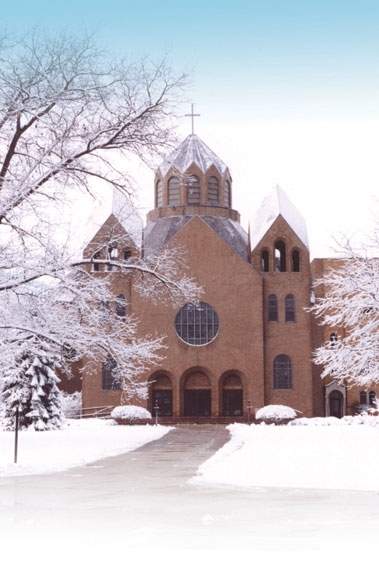 South Bend, Indiana — South Bend Chamber Singers’ annual Christmas at Loretto concert on Sunday, December 17 will be dedicated to the memory of local philanthropist June H. Edwards who died at age 91 on November 16. “She was a strong supporter of this concert,” said Nancy Menk, DMA, director of the South Bend Chamber Singers who present the annual concert at Saint Mary’s College. “The arts enthusiast always came to the dress rehearsals, as well as the concert, to show her enthusiasm for our musical efforts,” Menk added.

The seasonal event will be performed in the area twice – a South Bend concert begins at 7:30 p.m. at the Church of Our Lady of Loretto on the campus of Saint Mary’s College and a second performance will be part of a community concert series in South Haven, Michigan, at 7:30 p.m. on Tuesday, December 19, at Peace Lutheran Church, 06321 Blue Star Highway.

Featured at the holiday concert will be the world premiere of two new works by American composers William Averitt and Zae Munn. These, plus other new works for the season as well as familiar carols in new arrangements, comprise the concert. Six of the pieces on the program will include string quartet accompaniment and the concert will close with the traditional candlelit Silent Night .

“We have commissioned a new work from award-winning composer, William Averitt,” says Menk. “His choir and string quartet piece entitled Lullaby Beneath the Storm is a three-movement setting of three recent poems by Kansas City-based poet and conductor Robert Bode that reflect familiar Christmas themes in new elegant verse. The opening poem, Sister of the Wind, is dramatic — with pleas for comfort amidst a raging storm. The brief second poem, The Angel Gabriel to Mary, is a musical retelling of the annunciation, set as a dance of quiet joy and ending with the phrase, ‘Glory Be To God!’ The concluding Bethlehem presents a deeply hushed scene of the manger — the Holy Family is surrounded by gentle animals and all are enclosed by a ‘night of stars, beckoning and beautiful.’”

Averitt, retired professor from the Shenandoah Conservatory, Winchester, Virginia, is the composer of numerous works which have received performances throughout the United States, western Europe, Russia and Asia. The Chambers Singers will sing two others of his works, Tomorrow Shall Be My Dancing Day and Masters in This Hall, at the holiday concert.

Averitt has received several composer fellowships, grants and commissions from a variety of sources, including the National Endowment for the Arts (twice). Averitt’s recent commissions have been completed for the University of Missouri at Columbia ( Black Pierrot, premier 2017), Texas Lutheran University ( Where Dreams Fly, premier 2016) and (The Deepness of the Blue from Dreams and Scenes, premier 2012), Choral Arts of Seattle (Traveling Home: An American Requiem, premier 2011 and The Dream Keeper, premier 2009).

Zae Munn is professor of music at Saint Mary’s College where she teaches theory, composition digital media in music and orchestration/arranging. She has also taught at Interlochen Arts Camp, Bowdoin College, Transylvania College and Lehigh University. Her works have been published by Arsis Press, Balquhidder Music, Earthsongs and Frank E. Warren Music, among others.

Munn’s piece, Hushed Haiku, is a musical setting of five unpublished haiku by Karen Hesse, American author of historically-based books for young adults. As with traditional haiku, these evoke images of the natural world, with a focus on winter. Haiku structure requires five syllables in the first and third lines of each three-line haiku and the number 5 figures predominantly elsewhere throughout the Hushed Haiku and so it provides a textural basis for musical repetition that unifies the work. Hesse and Munn also have collaborated on a full-length opera, Witness and Blue Night.

The South Bend Chamber Singers, an ensemble-in-residence at Saint Mary’s College, is in its 29th season. For more information about Christmas at Loretto or other concerts in the 2017-2018 season, visit: www.southbendchambersingers.org. Tickets are available at the Saint Mary’s College box office in O’Laughlin Auditorium from 9 a.m. to 5 p.m. and can also be purchased by phone at (574) 284-4626 or online at Moreaucenter.com.

This concert is beautiful and very moving. So glad to finally sing it after being delayed for 2 seasons. 7:30 tonight at St Mary’s, or here is the livestream link: ... See MoreSee Less

Two weeks from tonight! Please join us for this beautiful and moving concert. ... See MoreSee Less