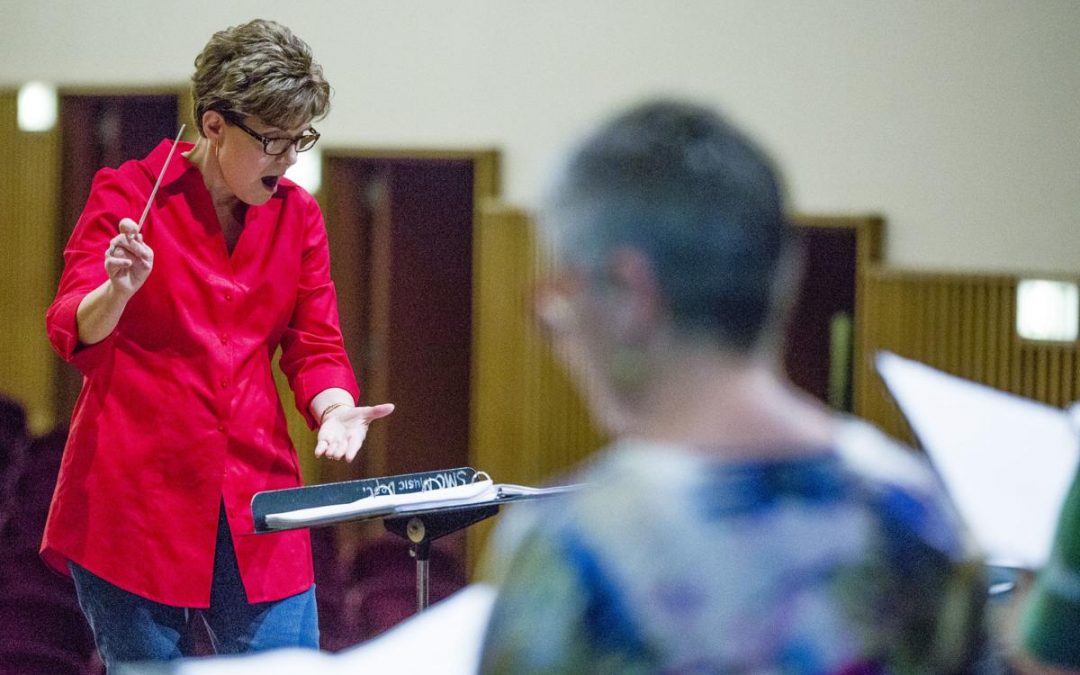 Inspired by a Pietá-like painting of a mother in an Iraq desert holding her deceased soldier son, composer John Muehleisen set out to write a choral piece that captured wartime loss by searching for a letter written between a mother and a son during wartime.

The composer had no trouble finding wartime correspondence, but he wasn’t satisfied with any of the letters he came across.

“I sat down in front of the TV exhausted from looking,” he says in a phone interview from Seattle. “And up pops this TV show. It was a BBC show, and there was Daniel Radcliff, and I thought, ‘Why is he in a military uniform? Is it Harry Potter goes to war? What is this?’”

The movie, “My Boy Jack,” chronicled the search for 18-year-old John Kipling, son of author Rudyard Kipling, after he went missing in World War I.

“I thought this was too serendipitous, and lo and behold, a couple of scenes later, here is John Kipling doing a voice-over in the trenches over in France of his final letter to his parents,” Muehleisen says. “So I looked it up and found it online. That’s how I got that letter.”

The letter became the foundation for “But Who Shall Return Us Our Children? A Kipling Passion.” The piece, which has been performed in Seattle and Kansas City, makes its Great Lakes debut Sunday with the South Bend Chamber Singers’ performance at Saint Mary’s College’s O’Laughlin Auditorium.

“That story really began to haunt me because it’s the story of, you know, Rudyard Kipling is a very, very famous writer and celebrity who worked very hard to get his son into the war,” Muehleisen says. “John should have never served. He was extraordinarily nearsighted, and he kept getting rejected by the medical boards because of his nearsightedness. Well, it took him almost a year, but they finally got him a commission in the Irish Guards. (He) started at the age of 17. He was trained for a year to be an officer, second lieutenant, and then he shipped out to France on his 18th birthday, Aug. 17, 1915, and then within a little over a month, he was dead.”

Although history now knows that John was killed in the Battle of Loos, his family did not. Their final correspondence from the military came in October of that year, stating John was missing and presumed injured. The family spent years seeking answers.

“But Who Shall Return Us Our Children? A Kipling Passion” is a concert-length oratorio in seven sections. Soloists for the concert include soprano Kimberly Giordano, tenor Matt Kelly and baritone Corey Crider as the Kiplings.

“This piece has a number of different themes that it presents to the audience, so No.1, it’s a work to commemorate the centenary of World War I and to honor the fallen,” Muehleisen says. “No. 2, it’s meant to honor the families and get us to remember the families of those who lose their loved ones.”

Other themes and subjects include military suicide and the injured that return from war.

“These themes are all in the piece, and they tend to elicit quite an emotional reaction from people,” Muehleisen says. “A friend of mine who is not prone to tears was pretty much sobbing a couple of rows ahead of me in the premiere. The piece ends with this increasing sense of remembering those who are gone, and psychologists will tell you how do you get over this trauma, any trauma, you tell the story. You tell the story over and over again. By remembering them, we make them present in our minds, in our hearts, and we tell their story.”

Chamber Singers founder and director Nancy Menk attended the piece’s Kansas City performance and has seen the kind of emotional response the work can produce.

“It’s a really dramatic work and it affects a lot of people on a lot of levels, you know,” she says. “Parents who lose children, people who’ve been in wars, pacifists and people who are against wars, people who support wars, and it addresses patriotism, love of country and just a father’s love for his son and wanting to make sure his son, quote, ‘grows up to be a man,’ in his words, so it’s just a lot of areas people can be affected.”

Menk is excited to present a new oratorio in South Bend.

“For me, what I’m really excited about, is bringing a piece like this to our community,” she says. “It’s the weekend before our Memorial Day, and there’s not many times in one’s life when they’re going to get to hear a major new choral work like this.”

Veterans and active-duty military members will be offered free tickets to the concert.

“Whether they are active duty or veterans, I want them to feel honored by the piece,” Muehleisen says and adds that he was concerned about how those who have served and are currently serving would react to the piece.

“One Vietnam vet came up to me after a performance, and he said, ‘That was tough, but I wanted to thank you for not pulling any punches and telling it like it is.’ He said, ‘We need to hear this. We really need to hear this,’ and he said — this was the most extraordinary thing anybody has said to me so far — he said, ‘I just can’t help but think if enough people could hear this piece and experience this piece that we might just stop shooting at each other.’”