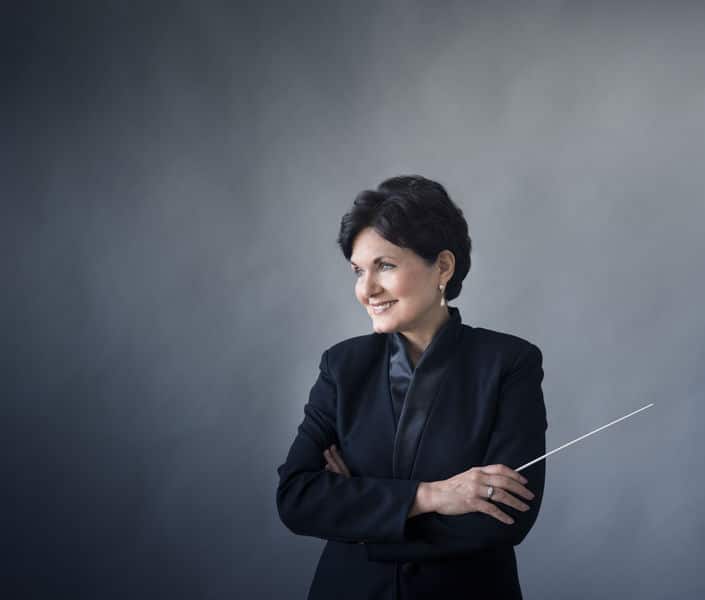 Since then, the SBSO’s Maestro Tsung Yeh retired in May, and only three musicians remain in the orchestra from that 1991 program: violinist Nic Orbovich, bass player Edward W. Randles and flautist Korin Schilling.

Similarly, only accompanist David Eicher and five singers — Ken Dahlstrom, Stephen Drendall, Joe Smith, Mary Ann LaPlante and David Homann — are still with the Chamber Singers who sang the “Gloria” a quarter century ago with the SBSO.

But the vocal ensemble’s founder and director, Nancy Menk, remains, and she’s conducting Sunday’s chamber concert by the SBSO, with Vivaldi’s “Gloria” as the concluding work.

The chair of the music department at Saint Mary’s College, Menk also directs the Northwest Indiana Symphony Chorus, which performed “Gloria” with the South Shore Orchestra in April.

“I kept thinking I’d love to do this with the Chamber Singers,” she says about that experience. “I knew they would get what I wanted to do with it. Then this opportunity came up. We don’t sing much Baroque music, but when we do, they do it well.”

Vivaldi (1678-1741) wrote at least three settings for the “Gloria” text, although only two survive. Of those, Sunday’s RV 589 has become his most popular work of vocal music and, possibly, second to only “The Four Seasons” in his canon.

An ordained priest who never said Mass, Vivaldi served as the instrumental teacher and composer at Venice’s Pio Ospedale della Pietà (Devout Hospital of Mercy), an orphanage for girls. As a result, many of his vocal works, written for use at Mass, lack tenor and bass solo parts, which is true of the “Gloria,” which has three soprano and two alto solo parts.

“Each movement is based on just one or two lines of text,” Menk says, “but he’s turned it into a 35-minute work. … I love the way we’re trying to shape it, the vocal lines, the phrasing so that it sounds as if it’s going somewhere with high points and low points, tension and releases.”

“It’s sort of an intermezzo between the two big pieces,” Menk says about Bach’s 10-minute symphony, which closes the first half of the concert. “In fact, some of these earlier pieces were used like an overture before an opera.”

J.S. Bach’s second son, C.P.E. Bach wrote 18 symphonies, most of them for string orchestras. This one is from a set of four late symphonies written for strings and winds, although the final movement emphasizes the violas and cellos.

“It just follows the typical three-movement form, fast-slow-fast,” Menk says, “but they’re all connected, so it comes off like one big movement.”

The concert begins with Stravinsky’s 1965 revision of the 1920 ballet “Pulcinella.”

The score calls for four vocal soloists and, Menk says, gives many of orchestra’s musicians solo spotlights, too.

Ballet Russes founder Sergei Diaghilev commissioned the work, with the libretto based on an 18th-century commedia dell’arte play.

“The texts themselves aren’t descriptive of what’s going on in the ballet,” Menk says. “People shouldn’t worry about the ballet. It’s not going to affect their listening to the music.”

At first, she planned to have an all-Baroque program, but then she discovered “Pulcinella,” which uses music written by the early 18th-century Italian composer Pergolesi, although not exclusively, because many of the works were misattributed to Pergolesi.

“It’s often described as Stravinsky’s experimentation with neo-Classicism,” Menk says. “In this case, he actually used the music of these earlier composers and took their melodic lines verbatim and then filled in his own harmony and added some rhythmic (elements). It’s amazing how much of the original is retained. When you first hear it, you say, ‘This is Stravinsky?’”