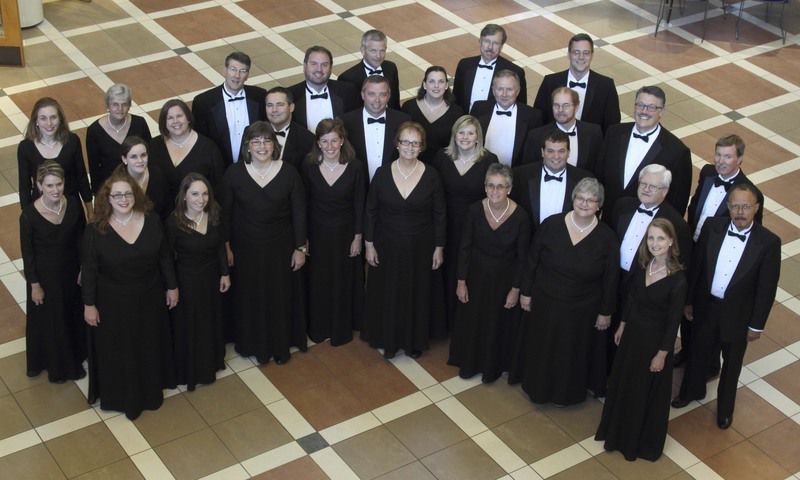 Menk is the conductor and musical director of the South Bend Chamber Singers, and the holidays are a particularly significant time for the ensemble. The works she chooses — often from innovative contemporary composers — tend to be quite complicated, so she has to get started early.

“People send me scores and I’ll pick up scores at conferences, and I put them in a big pile,” she says. “Over the summer, I’ll just play through them. I pick out the ones that appeal to me, and the ones that should appeal to the singers and the audience. I want interesting variety, things that are challenging — nothing too simplistic — then I’ll take those choices and build the program around them.”

Her signature holiday event is always the Chamber Singers’ Christmas at Loretto concert, which takes place Dec. 20 at the Church of Our Lady of Loretto on the campus of Saint Mary’s College, where Menk is the chair of the music department.

The concert includes the world premiere of a commissioned piece by Daniel Knaggs. It’s the 10th installment of the composer’s ambitious and practically unprecedented 50-year project, in which Knaggs writes a new ‘Ave Maria’ setting annually, with the series not ending until 2054. The present setting is called “Ave Maria No. 10 — Virgo Serena,” using the same ancient text that the old master Josquin des Prez used for an ‘Ave Maria’ circa 1485.

Menk says that she’s pleased that the singers took to the piece right away, which is always a good sign. There’s a lot of rehearsal time involved when mastering new works, so it’s best when the performers connect with a composition at first contact.

“The singers will end up knowing the music better than anybody, aside from the composer,” she says. “If they like it right away, the audience probably will too.”

Some of the program will be sung a cappella, other selections to the accompaniment of an organ. But for Knaggs’ ‘Ave Maria’ and Gerald Finzi’s “In Terra Pax,” Menk will deploy the forces of her chamber orchestra.

Finzi wrote “In Terra Pax” in 1954, and it intertwines lines from the Gospel of Luke with a poem by Robert Bridges, called “Noel: Christmas Eve 1913.” In the poem, the narrator takes a late-night winter’s walk in the British countryside and his mind wanders into a vision of the Biblical Christmas story. Finzi gives a soprano the role of the angel announcing the glad tidings to the shepherds.

Guest baritone soloist Stephen Lancaster is assigned the voice of the poet for this concert, and the Chamber Singers’ own Sharon Bain takes the angelic soprano part.

Only one segment of Menk’s Loretto concert remains unchanged every year: “Silent Night” ends the performance, with the lights turned off and the singers illuminated by candlelight.

“A lot of people have told us that their Christmas starts when they come to this concert,” she says. “Our ‘Silent Night’ has a lot to do with that.”

• Who: The South Bend Chamber Singers

• Where: The Church of Our Lady of Loretto on the campus of Saint Mary’s College