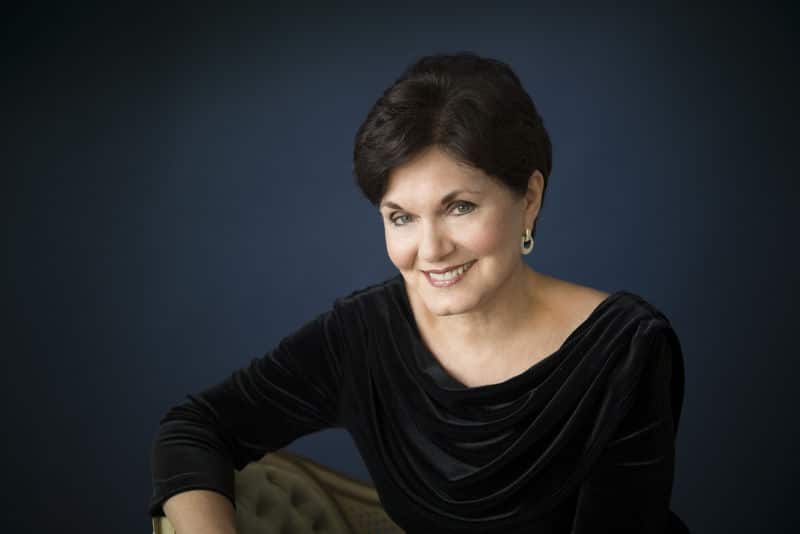 When Nancy Menk commissions a new work for the South Bend Chamber Singers, she allows the composer to select the text, subject to her approval.

So it was a happy coincidence when William Averitt said he wanted to use the poetry of Robert Bode for “Lullaby Beneath the Storm,” one of two world premieres on the program for the Chamber Singers’ annual “Christmas at Loretto” concert Sunday at the Church of Our Lady of Loretto on the campus of Saint Mary’s College.

“Robert Bode went to grad school with me at the Cincinnati Conservatory,” Menk says. “We’re really good old friends. He’s a choral director, too, but he’s also started writing poetry. People have started using his poems as texts for choral music. The connection makes this piece even more personal for me.”

The three Bode poems — “Sister of the Wind,” “The Angel Gabriel to Mary” and “Bethlehem” — chart the Nativity story with fresh details. There’s a blasting storm, a calm annunciation and an eventual happy ending in the peaceful manger on a starry night.

Averitt wrote the accompanying music for string quartet, so Menk recruited violinists Daniel Stein and Sun Huh, violist Rose Wollman, and cellist Kendrick Morris for this concert. The Chamber Singers’ regular accompanist, David Eicher, will also be on hand to provide organ and piano. It’s fairly rare for the Chamber Singers to work with a string quartet, so Menk seized the opportunity to seek out Christmas choral music scored for various combinations of the four instruments. Some of the works use full string quartet, others just two violins or violin/cello duet, solo cello, etc.

Another noteworthy aspect of the concert is the gender balance. All too often, the only prominent woman involved in a Christmas concert is the Virgin Mary. For this year’s Loretto event, there are several women among the composers and poets on the program, although Menk says she didn’t program them to make a point.

“I just pick music that’s good, music that’s well-written,” she says. “A lot of these pieces just happen to be by women.”

The text consists of five haiku poems by Karen Hesse. Munn has a special affinity for Hesse’s words and has already used them for a short opera, 2012’s “Night of Blue Magic,” and a full-length opera, 2006’s “Witness.” For “Hushed Haiku,” Munn plays with the number 5 extensively. There are the five syllables in the first and closing lines of all five poems, dalliances with 5/8 and 5/4 time signatures, as well as a five-part chorus and an underlying five-word phrase that serves as an ostinato.

Munn chose haiku that reflect images from the natural world, specifically scenes in winter. Although there are plenty of devotional works in the program, Menk included a good deal of secular material as well. That way, the concert doesn’t become merely a prolonged musical Nativity scene.

“There are actually a few more familiar tunes than we usually have,” Menk says. “They’re in new arrangements, but people will recognize them.”

Alongside classics such as “The Wexford Carol,” “Tomorrow Shall Be My Dancing Day” and “Lo, How a Rose E’er Blooming,” Menk has placed secular works including Edward Elgar’s “The Snow,” a setting of a poem by his wife, Caroline Alice Elgar.

One striking composition by Bob Chilcott combines ancient and modern, sacred and secular, all at once.

In his piece, “Before the Ice (O Magnum Mysterium),” Chilcott juxtaposes an Emily Dickinson poem and the ancient “O Magnum Mysterium” text. The singers negotiate melodies to both texts simultaneously. It’s the type of music that demands active participation from the audience. Listeners have to concentrate and engage much more so than in the usual holiday-music presentation.

Menk dedicated this year’s concert to the memory of one of the group’s most ardent followers, the philanthropist June H. Edwards, who died Nov. 16.

“She was such a faithful supporter for so many years. She was deeply interested in the music, the compositions,” Menk says. “(‘Loretto’) was her favorite. She was always there. Almost every year, she’d even be there for our Friday night dress rehearsal.”

We mourn the loss of one of our longtime singers and dear friend, Carol Stauffer Bosler. Carol was alto section leader for many years and had a lovely, warm, angelic voice. She was also a beautiful soul, exuding kindness, caring, and genuine warmth in every interaction. We send our condolences to her husband, sons and their wives, mother, brothers, and grandchildren. Rest In Peace, Dear Carol. brownfuneralhomeniles.com/tribute/details/3374/Carol-Bosler/obituary.html#content-start ... See MoreSee Less